When the Blues bowed out of the playoffs rather meekly, we all knew there would be consequences. Coach Ken Hitchcock survived that failure, but change was inevitable for the roster.

T.J. Oshie became the latest and most notable veteran to exit, departing to the Washington Capitals in a trade designed to expedite the evolution of the team nucleus towards new leaders.

His underwhelming playoff performance against the Minnesota Wild made him an obvious mark for Blues general manager Doug Armstrong, who sought to freshen up his roster after watching the squad go stale. He hoped to create an opportunity for energetic prospect Robby Fabbri, who made a huge impression in last autumn's training camp.

The Oshie move finally came in a trade with the Washington Capitals Thursday. But the return of Troy Brouwer, goaltending prospect Phoenix Copley and a third-round pick isn't overwhelming. Perhaps some fans flashed back the Rod Brind'Amour deal, which fetched Ron Sutter and Murray Baron.

But this is different. Oshie plateaued here at a good-but-not great level. Brouwer is a three-time 20-goal scorer who figures to bang around in a third-line role.

He should play sturdier hockey than the recent vintage Oshie, who hasn't played with his same youthful abandon after suffering a series of injuries stunted his development. Brouwer will add some heft up front and give the team a little different look.

He can take faceoffs and check. He plays a straight line game and uses his size along the wall and in front of the net.

But Brouwer was a non-factor for Washington in the most recent playoffs, producing no goals, three assists and a minus-3 rating in 14 games for the Capitals while playing almost 18 minutes per game.

He will count $3.75 million against the salary cap next season and then become an unrestricted free agent, which is notable for a team trying to clear long-term salary cap flexibility to accommodate a new contracts for Vladimir Tarasenko and Jaden Schwartz -- who supplanted Oshie as a franchise cornerstone.

As for Oshie, he gets a fresh start. Moving from the Blues to the Washington Capitals is about as good as it gets under the circumstances.

He and former Los Angeles Kings winger Justin Williams come aboard to add depth to an offense disproportionately relying on Alexander Ovechkin and Nicklas Backstrom. They should help bring along emerging forward Evgeny Kuznetsov while also giving the power play different looks.

Oshie escapes St. Louis, where he was at once a fresh-faced fan favorite and source of frustration for those expecting him to become a star. Oshie topped 20 goals just once while wearing the Note.

Here is how the Twitterverse reacted to all of this:

Eric Stephens
@icemancometh
Not feeling how many appear down on Troy Brouwer in the T.J. Oshie deal. Can score, physical, durable. West will be war of attrition.
Retweeted by jprutherford
Jul. 2, 2015

Pierre LeBrun
@Real_ESPNLeBrun
Blues have been looking for an apples for apples trade of core guys for some time. In Brouwer they get a character guy, more physical player
Jul. 2, 2015

Jeremy Rutherford
@jprutherford
Brouwer: "I'm an honest player, a guy that works hard. I can make some plays ... but I'm a big-bodied forward, get into the corners."
Jul. 2, 2015

TJ Oshie
@OSH74
Thank you Blues Fans for all of your support over the years. It was a pleasure playing in St Louis
Jul. 2, 2015

Jeremy Rutherford
@jprutherford
Oshie: My initial reaction was shock. I'm excited to go on to the next chapter of my career. #stlblues
Jul. 2, 2015

Jeremy Rutherford
@jprutherford
Oshie: I think the media blew out of proportion the things I said about being refreshed (after missing time with the flu). #stlblues
Jul. 2, 2015

Jeremy Rutherford
@jprutherford
Oshie: If you would have asked me last summer, I would have told you I was going to retire a Blue. #stlblues
Jul. 2, 2015

James Mirtle
@mirtle
Some Blues fans are saying Oshie "sucks" but what he looks like is a second liner being played like a first. http://t.co/PLT6XEczhK 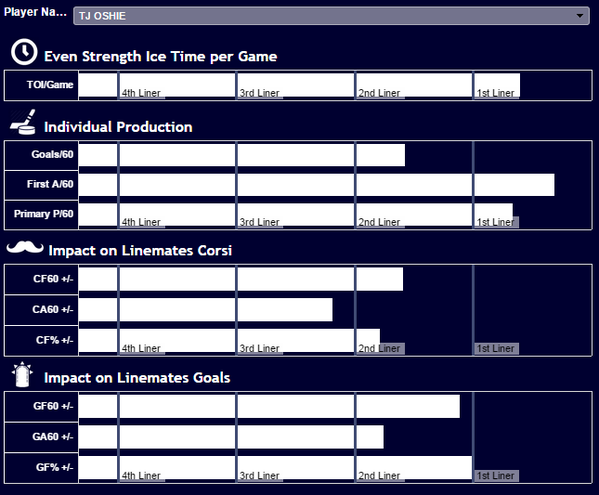 Jeremy Rutherford
@jprutherford
Army: We're still active in maybe looking to add another piece or two. But they're not a higher level. This solidifies group of 9 forwards.
Jul. 2, 2015

Pierre LeBrun
@Real_ESPNLeBrun
Pittsburgh and St. Louis had also talked about an Oshie trade but Pens dealt for Kessel instead
Jul. 2, 2015

Joe Yerdon
@JoeYerdon
That Oshie deal for Washington is awesome for the Caps. Gonna be fun times in D.C.
Jul. 2, 2015

Greg Wyshynski
@wyshynski
As I wrote: Oshie + Williams >>>>>> Ward and Brouwer. Great work from MacLellan this summer so far.
Jul. 2, 2015