Gordon: Teams bid on Hamels as market heats up Live 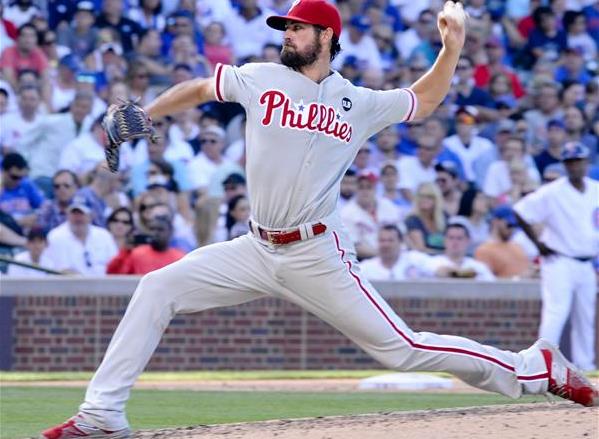 No, it doesn't appear the Cardinals will land Phillies starting pitcher Cole Hamels. Fans in these parts have been monitoring that scenario for months, hoping that a trade package of Tyler Lyons, Pete Kozma and a low-level prospect could bring another ace-caliber pitcher to town.Dream on, Cardinals fans. The Phillies need to make a major score by dealing Hamels -- and the Reds set a high bar for any such deal while dealing Johnny Cueto to the Royals.The Cardinals own plenty of starting pitching. GM John Mozeliak focused on relief help instead (Steve Cishek!) and stayed in the market for a first baseman with power. The Hamels Sweepstakes are building toward a Thursday or Friday conclusion, with the Phillies seeking best offers by today. Cole's next start was pushed back to Friday to accommodate all the chit-chat.Meanwhile, the Dodgers aimed for pitching and tattoo depth by targeting Mat Latos along with spare outfielder Michael Morse from Miami in the latest Marlins fire sale. (Morse appeared headed elsewhere to complete a three-way deal. Then, as could only happen with the Marlins, the deal stalled.) Does that mean LA is out on Hamels?Well, maybe. Because . . . Tigers baseball czar Dave Dombrowski reversed course and put David Price up for bidding this afternoon, along with power-hitting outfielder Yoenis Cespedes and others, including Alex Avila, Rajai Davis and Alfredo Simon.Again, the Cueto trade package set a high and appealing bar and the Tigers could sure use an influx of young talent. The Cubs, Yankees and Astros could go after Price, along with the Dodgers. The Astros could go after Cespedes, along with the offensively challenged Mets, Twins, Angels and Orioles.Here is what else is shaking as the deadline nears, thanks to the insiders on Twitter:

Jayson Stark
@jaysonst
Hearing from teams in the Cole Hamels hunt that if he gets traded, it likely won't happen until at least Thursday. Possibly deadline day
Jul. 29, 2015

Buster Olney
@Buster_ESPN
Introduction of Price to market this afternoon has some bearing on Hamels' bidding, but remember, TEX mostly pursuing Hamels for '16, beyond
Jul. 29, 2015

Jeff Passan
@JeffPassan
Hamels' long-term deal does keep him desirable to teams like Texas looking long-term. Tough to leverage them when others can turn to Price.
Jul. 29, 2015

Bill Shaikin
@BillShaikin
Could this be a Friday conversation? "Cole, we can trade you to a contender, but not one you prefer, or you can stay here. Your choice."
Jul. 29, 2015

Jeff Passan
@JeffPassan
Can see why Detroit wanted to hold onto Price. Difficult to come to terms with missing your window. This is the Tigers' officially shutting.
Jul. 29, 2015

Craig Calcaterra
@craigcalcaterra
Do the Cubs get a say in the Price trade talks? Like, to tell whoever trades for him to take it easy so he's not hurt when they sign him?
Jul. 29, 2015

Buster Olney
@Buster_ESPN
SF presence in Price talks fascinating, because they don't have a lot of pressure to do something… But they do tend to make WS-worthy moves.
Jul. 29, 2015

Jon Morosi
@jonmorosi
Cardinals certainly could get into the Price market if they make Alex Reyes available. Huge arm.
Jul. 29, 2015

Ken Rosenthal
@Ken_Rosenthal
One reason Price market was depressed a year ago was because few teams could afford him in $20M range for final year of arbitration.
Jul. 29, 2015

Ken Rosenthal
@Ken_Rosenthal
The number of teams interested in Price will be greater now. That alone should help #Tigers, who hold the most attractive rental on market.
Jul. 29, 2015

Bob Nightengale
@BNightengale
The #Astros hate to give up prized prospects for a rental, but understand that #Price is a different story, and could pitch team to WS
Jul. 29, 2015

Joel Sherman
@Joelsherman1
#Mets get associated with Cespedes but wonder if Rajai Davis more realistic get from #Tigers (cont)
Jul. 29, 2015

Jayson Stark
@jaysonst
Aroldis Chapman unlikely to move. List of teams in on him has shrunk so dramatically, chances of Reds trading him are down to slim and zilch
Jul. 29, 2015

Jerry Crasnick
@jcrasnick
A MLB exec on Gerardo Parra: "I wonder if the Brewers over-played their hand on him. I just expected him to be gone by now.''
Jul. 29, 2015

Jim Bowden
@JimBowden_ESPN
According to sources there is a third team involved in the Dodgers/Marlins trade which is bigger than being reported
Jul. 29, 2015

Jayson Stark
@jaysonst
Third club in #Dodgers-#Marlins believed to be a team that winds up with Michael Morse. He has no apparent fit on the Dodgers roster.
Jul. 29, 2015

clarkspencer
@clarkspencer
Now hearing the trade is far from complete. Sources telling me it could be falling apart. Total confusion. #marlins
Jul. 29, 2015

Jerry Crasnick
@jcrasnick
#Orioles are holding the line on trading Kevin Gausman or prospect Mychal Givens for an impact bat at the deadline.
Jul. 29, 2015

Jim Bowden
@JimBowden_ESPN
TradeDeadline so active/ fluid right now that there could be quite a few I-Phones & Androids placed on DL by Saturday with keyboard issues
Jul. 29, 2015