University of Missouri System President Timothy W. Wolfe resigned on Monday during am emergency Board of Curators meeting following weeks of protests over his leadership, a hunger strike from a graduate student and a boycotting football team.

Shortly after, Jonathan Butler, the Mizzou graduate student who said he had gone more than a week without food, announced his hunger strike was over.

JB.
@_JonathanButler
The #MizzouHungerStrike is officially over!
10:36 AM - 09 Nov 2015
Mizzou football players confirmed to Post-Dispatch beat writer that they will resume practice and play BYU on Saturday.

Dave Matter
@Dave_Matter
Mizzou players confirm Saturday's game vs. BYU is on. Team will practice Tuesday. (Monday is normally an off day)
10:59 AM - 09 Nov 2015
Mizzou players are expected to speak to the media Monday afternoon during the team's media day, where they will make their first public comments since they announced they would boycott football activities in support of Butler's hunger strike.
Many posted their initial reaction to Monday's news on Twitter:

Grant Jones1⃣5⃣
@g_jones015
Huge thanks to Coach Pinkel, the rest of the coaching staff and our Mizzou family for supporting us in this movement!
11:14 AM - 09 Nov 2015

Clarence Champ Green
@clgreen93mu
Thanks to the MOST WINNINGEST coach in Mizzou HISTORY @GaryPinkel for supporting a greater cause, we love you!😁 #ConcernedStudent1950 #GGM
11:05 AM - 09 Nov 2015

John Gibson III
@thatgibsonkid
@1Sherrils_2MIZZ @jmon_moore Before lunch on Monday morning was the goal from the jump! #ConceredStudent1950
10:23 AM - 09 Nov 2015 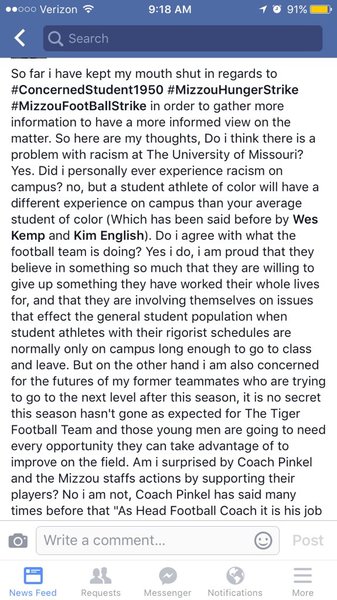