Man, they hate the Cardinals Live

WSJ Sports
@WSJSports
Why the #Cardinals are the most hated team in the MLB playoffs (now that the Yankees are out) http://t.co/yNgwrsELS1 http://t.co/OxghPbfHLP 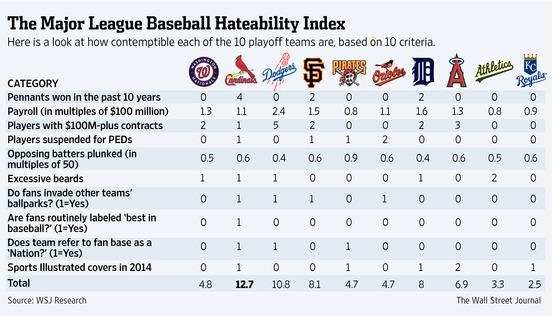 Sep. 30, 2014
See that? Most hated team. Of course, we're playing the second-most hated team in the division series. This ranking received lots of attention on Twitter, even from the mayor of St. Louis.

Brian Costa
@BrianCostaWSJ
The mayor of St. Louis wrote this column in response to the Cardinals' ranking atop our MLB Hateability Index. http://t.co/4iloyVsisB
Oct. 2, 2014
Deadspin, Gawker's sports blog, pounced on the opportunity to write another post hating on the Cardinals. (Warning, profanity. Lots of it. Not linking to it here, because the Deadspin's tweet with the link has profanity in it.)

Will Wilson
@willwilson3
They appear each October and its the same recycled trash from @Deadspin articles two years back. We get it you hate the Cardinals, cool
Oct. 3, 2014

Sean Sakimae
@SnapTheJap
@Deadspin I didn't need ANOTHER reason to HATE the @Cardinals and their deplorable fan base, but thank you for giving me ONE MORE. #Dodgers
Oct. 3, 2014

Brian Webb
@TheBWebb33
@Deadspin that's so cute. Another I hate the cardinals article. These always seem to come out in October. Strange I know#ironic
Oct. 3, 2014
Ugh, the Cardinals. We hate them, they're always in the postseason:

Don Rafael
@TopShelfRa
I hate the Cardinals because it always seems as if they kill my hopes whenever we actually make it to the postseason.
Oct. 3, 2014

Mark
@DamicoMark
I'm so happy that America is finally on board as a nation and all hate the Cardinals
Oct. 3, 2014

kyla the worst
@fifthstarter
God I hate the cardinals. Pirates should have won the division.
Oct. 3, 2014

Craig Henman
@henman11
If you hate the Cardinals, you're okay with me! Go Royals!
Oct. 2, 2014
Cardinals fans: "Don't hate us because we're successful."

Jeremy Platt
@JeremyPlatt
Man I understand a lot of y'all hate the cardinals and the fans but sorry we're a successful franchise!
Oct. 3, 2014

S_B
@just_djsb
it's funny all the hate the cardinals and the fans are getting, jealousy is ugly, plenty of people don't like me so it doesn't bother me
Oct. 3, 2014

Free Bill Simmons
@RHancock19
I don't need you people to remind me why you hate the Cardinals. Just keep kissing the rings.
Oct. 3, 2014

Hannah mic
@mic_hannah
Give me one good reason why you hate the cardinals besides them bein better than you?Thats right silence! #NLDS #CardinalNation #youready
Oct. 2, 2014

kcp
@caseymarie713
I love people who hate the @Cardinals...go ahead and start following hockey. We'll send you a postcard from the playoffs. #sorrynotsorry
Oct. 1, 2014
(Hey, no reason to be mean to hockey fans.)

Tyler Poslosky
@TylerPoslosky
I find it highly entertaining reading all of the banter regarding how folks hate the #Cardinals.
Oct. 1, 2014
Top-notch farm-team system = great reason to hate a team.

Sansa/Tyrion fanfic
@HarrisNye
I hate the Cardinals because I'm jealous of that assembly line of top tier position player prospects
Oct. 2, 2014
Can't hate them for their hot manager, though.

Sam
@levoodle
i hate the cardinals and am uninvested in the tigers, but if they both make the world series at least it will be hot manager vs hot manager
Oct. 2, 2014
Or the catcher:

Me
@bigred_swag
As much as I hate the Cardinals I wouldn't mind watching Molina try and stop the Royals speed in the World Series
Sep. 30, 2014