Gordon: Cardinal Way leads back to the NLCS Live

Once again, the Los Angeles Dodgers had to bundle up their bubble machine and their Mickey Mouse ears for the winter.

The Cardinals sent them packing with still another dramatic blast, Matt Adams' three-run homer in the bottom of the seventh inning against Dodgers ace Clayton Kershaw. They beat the Dodgers 3-2 and won the National League Division Series three games to one.

"Continue to fight, never know when you might land something," Cardinals manager Mike Matheny said during his postgame news conference.

"That is the way we play, to the very last out," starting pitcher Shelby Miller said during his postgame news conference.

"Bad deja vu all over again," Kershaw told Yahoo! Sports after the game.

"They were better than us this series," Dodgers manager Don Mattingly said during his postgame news conference. "When they needed to get something done, they got it done."

Now the Cardinals move on to the NL Championship Series while giving ace pitcher Adam Wainwright some needed rest. (His nagging elbow soreness would have made him questionable for Game 5 of the NLDS).

They also have starting pitchers Lance Lynn and John Lackey positioned to pitch two games if necessary in the best-of-seven series.

MLB
@MLB
They’re back! For the FOURTH straight year, the @Cardinals are headed to the #NLCS: http://t.co/T2ZcLLmMwQ http://t.co/NwtvvtGyot 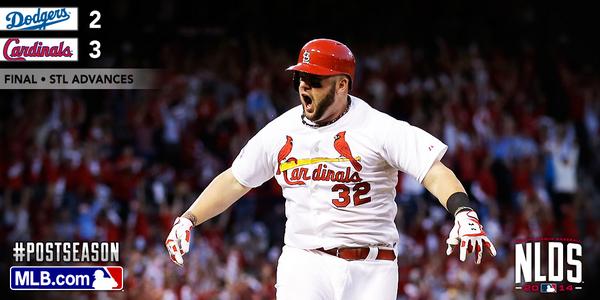 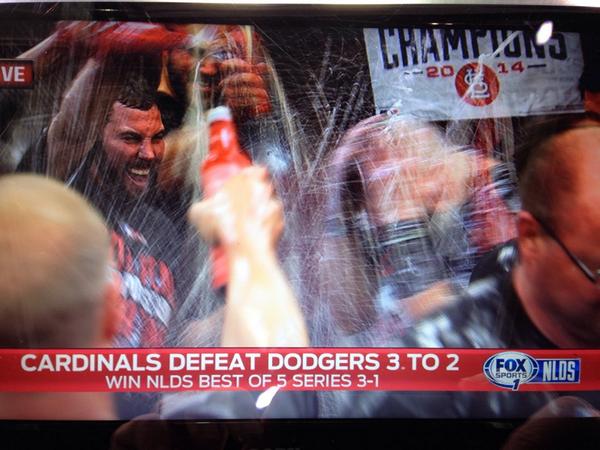 Not only are the Cardinals marching on, they are reminding the baseball world that they could contend for a long, long time.

Once again the Cardinals graduated young players into bigger roles:

Then there is the maturity factor. Matt Carpenter tore into the Dodgers, proving he belongs in the team nucleus for the long haul. His time has come.

Adams battled through his late-season slump, his lingering side muscle soreness and his season-long struggle versus lefties to deliver key hits -- including the dramatic Game 4 winner. "I got a curve ball up in the zone," he said. "I saw it pop up out of his hand and thought it might be a good one to hit.

"I don't think the touched the bases the whole way around.:

Add it up and the rest of the country has plenty of reason to dislike this team. The good citizens of Cardinal Nation are probably OK with that.

Here is how the Twitterverse reacted:

Jeff Passan
@JeffPassan
The Cardinals came back from deficits of five runs and two runs to beat the best pitcher in the world twice. They deserve this series.
Oct. 7, 2014

DJ Gallo
@DJGalloEtc
They still wear jerseys with two little tweety birds on them. No number of championships can overcome that.
Oct. 7, 2014

Craig Calcaterra
@craigcalcaterra
But really, thank goodness we get to see the Cards in the NLCS. Maybe the Giants too? It'd be novel!
Oct. 7, 2014

Jeff Passan
@JeffPassan
The first three teams out of the postseason are the Dodgers, Angels and Tigers. Combined payrolls: $552M. The teams that beat them: $310M.
Oct. 7, 2014

Craig Calcaterra
@craigcalcaterra
Your best bat out of the lineup. He has a hurt ankle, but you pinch run him. Never use your best reliever. Just go away, Donnie Baseball.
Oct. 7, 2014

Steve Rushin
@SteveRushin
Dodgers flight home will still layover in Phoenix for a ceremonial dip in the Diamondbacks pool.
Oct. 7, 2014